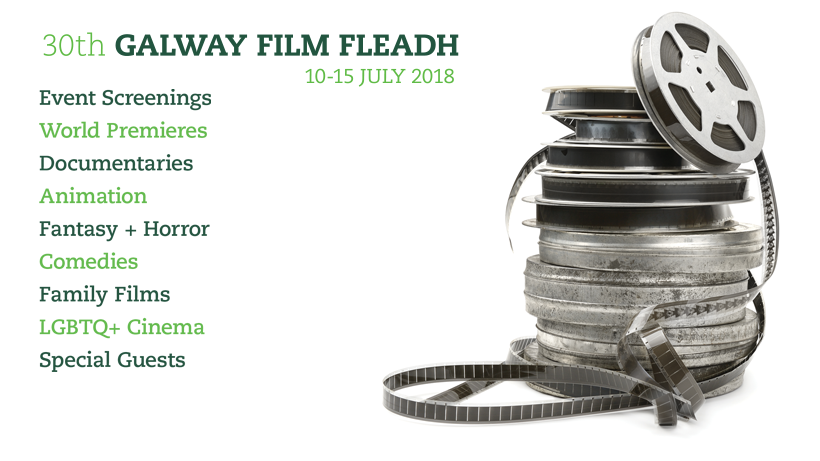 Hello Everyone! Thanks for reading our blogs and sharing the love!!! We are so happy you guys are loving these as much as we are!

Yes Film Fiends you’re in for a real treat this coming week as the annual Galway Film Fleadh, now in it’s 30th year, begins on Tuesday July 10th and runs until Sunday the 15th. We’ve done the hard work and whittled it down to five must-see movies so you don’t miss out! #keepitSWUITE right!  The sunshine doesn’t look like it’s going anywhere soon so take some shade indoors and visit any one of the amazing Film Fleadh venues across the city.

The Incredibles 2 directed by Brad Bird. WHEN: Wednesday 12th WHERE : Pàlàs 14:00

We’ve waited 14 years for the sequel to The Incredibles. Who doesn’t love a good Family Friendly Feminist sardonic superhero? Enter Elastigirl who managed to buck tiered gender cliches with a tale of mom who goes to work while dad stays at home to mind the kids. Writer and director Brad Bird helmed the first Incredibles movie which won an Academy Award for best animated feature film.  We are hugely excited to see this much anticipated return from Pixar and one for all ages with recurring themes of parenting in a working class family.

Why does the devil need a doorway when he can come and go as he pleases? I hear yah, but this movie is not one to be taken light-heartedly.

Set in the 1960s Ireland it tackles the topic of ‘Fallen Women ’ of the Magdalene Laundries, with a decent 8 on IMDb if the hype machine is to be trusted. Over roughly 23 years ago the Laundries were in operation. 30,000 women and girls are believed to have passed through a real life Handmaids Tale. Let’s pay homage to the women whom society rejected by supporting this film. Director Aislinn has managed to find a conduit for the anger and betrayal that resides in the wake of the scandal she has found herself in. Given the proximity of the Bon Secours ‘Mother and Baby home’ in Tuam, just down the road from Galway, we think this extremely important and poignant movie is well deserved in the Top 5 list.  But go watch it for yourselves and tell us what you think!

Or do! We definitely think this film IS worth leaving home for! Don’t Leave Home is a surreal, slow moving Lynchian mind trip of a thriller. The hook of the movie centres on an urban legend of a haunted painting with creepy mansions and disturbing disappearances.Tully describes it as a polite horror: ‘Hereditary for old people who still go to church’. Check out Michael Tully telling all about the making of it in the video below!

SO….if you do leave home to see this movie be sure to let us know! We want to hear your thoughts!

Directed by Joshua Leonard who first came on the scene with the lo-fi sensation Blair Witch Project. This movie deals with the relationship between Mother and Son in the aftermath of a tragedy. Oscar winner Marisa Tomei is said to make an appearance at the film and she’s to receive the Galway Hooker award. Yes, of course I am referring to the beer. You guys! !

No film fleadh would be complete without a mixtape music documentary granting you a backstage pass to such influential yet oft overlooked bands featuring Nico from The Velvet Underground to the all-girl punk rock group The Slits. My choice is the often overlooked and hugely influential The Go-betweens: Right Here: a heartfelt tale of the 80s band that might have conquered the world but somehow never did.

SO. There you have it! Pack your bags, book with SWUITE aparthotel 2 nights midweek, for two adults sharing will cost less than €150….if you call us and quote this blog that is!